“I don’t know which Karuta is most genuine. But don’t you think the Karuta world we love is greater towards the people who are in a team?”
— Arata to Shinobu

The story so far: Chihaya finally managed to establish a Karuta club in Mizusawa and even achieved the championship at Tokyo regional high school team tournament against Hokuo, a school with an already well-established karuta club. But after the news that her friend from Fukui—the karuta prodigy who was the reason for her discovery of the sport—declared that he will no longer play Karuta, Chihaya along with Taichi decided to visit Arata.

The Second Verse sequel to the first part of the live action Chihayafuru is the continuation of the story of our main characters – Chihaya, Arata, and Taichi – who are still in the process of discovering themselves as they immerse themselves more in the world of cards. There is also the appearance of the unbeatable and reigning Queen, Wakamiya Shinobu, who challenges not only their skill but also the way they look at the game they love the most. 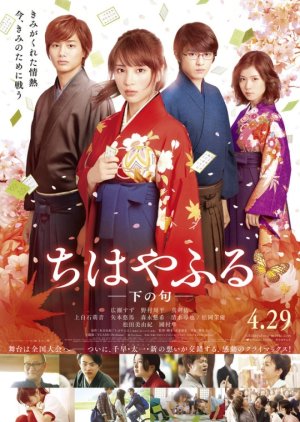 Before diving into this second part, we must first acknowledge how First Verse was a very well-made prequel to this live action adaptation which gave way to the smooth transition into Second Verse. Much like the game of Karuta, where the yomifuda (the cards that are read) is the first one in play and then the corresponding torifuda (the cards to be touched) will be the one to match, you have to go through the first part before jumping over to this.

Several of the major characters were already introduced, and now we somehow understood how each of them behaves and what their motivations are. This is most helpful especially if the audience is unfamiliar with the source material of this film.

I have already mentioned this in the first part, about the live action probably having the best and spot-on casting I have seen so far–starting from the main leads down to its supporting characters. Maybe not all in form but more in substance. Now joining the fray is the queen of Karuta, Wakamiya Shinobu played by Matsuoka Mayu.

Mayu really nailed it as the queen. From her first appearance in her elegant kimono to her Snowmaru style of fashion, she’s Shinobu given life. Some would think it’s probably because of the familiarity of the outward appearance of the character but I think it’s part Mayu too. She just became the haughty queen. Aloof, detached and portrayed as a self-serving character who looks down on others and their way of Karuta. She’s the unbeatable player.

But beneath the cold demeanor, Mayu’s performance also gives us the feeling that Shinobu is tired of having no real competition in the Karuta world. Also, the reason why she was so annoyed at the ‘good for nothing megane’ because he’s the only one who could understand her and now he’s not even playing. Both loners at the top with their prodigious skill in the game, they are comrades of sorts. She also believes that Karuta should be played alone to make you a stronger player. Mayu’s performance as the queen was at its best when she was playing Karuta against Chihaya. Mayu’s expressions gave us what the scene wanted to convey, that the queen was finally awake and fully engaged in a match, with an opponent who is giving her all despite knowing the odds.

There was also her love for daddy bear and snowmaru which made it into the film that gave relief to the stiffness of her character. And speaking of relief, that’s also one of the things I like about this live action. They manage to insert some funny and adorable moments, may it just be on the background or upfront cuteness especially with the two girls – Chihaya and Shinobu. There’s Chihaya and her sleep-coma situation, Shinobu and her love for snowmaru and daddy bear which rivals Chihaya’s, and even that tiny part when Chihaya was bawling her eyes out after her game with Shinobu..

Another important thing is that we finally got to see more of Mackenyu and his Arata! I have to admit, I really like the visual of this Arata and the Fukui accent is charming too. He’s gentle, polite and humble — a definite contrast to Shinobu’s haughtiness. The scenes between the two are fun to watch because as opposites as they are in nature, they have mutual respect for each other in Karuta.

Can I ship them?

But behind the gentle exterior of the boy, is the Arata who is lost without his grandfather, and it turned out that his grandfather is also his Karuta. Mackenyu gave his best to portray the vulnerability of a boy who is struggling to find his love for the sport again. I especially love the part where he sees each member of the Mizusawa team and realized how Karuta connects them all. He makes it so hard to side with steadfast Taichi because he’s… well he’s Arata! But this bit should have made him a little envious because he was not playing with these two:

The story not only focused on the queen and the struggle of megane–kun but it also touched upon the conflict of the Mizusawa Karuta club. Ayase and her goal to play the queen was at odds with the team’s goal. But with the intervention of the karuta gods, and the help of Hokuo (in a way), the group was made whole again, and it was seen most obviously in the way they played even in their individual matches. It also coincides with the theme that this film is trying to convey, which is the whole question of which is the better Karuta? The one played by a single person or a team?

As with the First Verse, the most attractive point of this film for me is when the game of Karuta is being played. The recklessness intertwined with passion, the team spirit at full throttle, and even the message of a friend can all be seen and felt through them playing their hearts out.

All in all, the beautiful and dreamlike cinematography still stands out, especially in karuta matches. The recurring characters from the first part and the ones we met here in Second Verse did an awesome job with their roles, and as I have said in part one — it has been truly satisfying to see this story come to life. This is a very enjoyable sequel and a solid watch for someone like me who is a fan of the series. Hoping the third and final part of the live action adaptation wraps up the story well.