In more ways than one, it all started with a book.

Kaneki Ken who is a regular college student encounters a beautiful girl who reads the same book as him. Rize, the girl he met, is apparently a ghoul, and that is when the tragedy of his life started. Ghouls are beings who looks the same as humans but they survive by eating human flesh. And following the events that started his descent to the world of ghouls, Kaneki finds himself standing between the worlds of predator and prey. He is now someone who can never wholly belong to one world.

It’s interesting to note that the main character of this series even forewarned the readers about his story. I only came to realize that this is indeed a tragedy and that he was right in saying:

“I’m not the protagonist of a novel or anything. I’m just a college student who likes to read, like you could find anywhere. But… if, for argument’s sake, you were to write a story with me in the lead role, it would certainly be… a tragedy.”

I was first intrigued when I read this manga because of the reference to Herman Hesse’s Demian. I love how the quote was used in the chapter where Kaneki first started to accept his ghoul side to save a friend. And more than that I was curious as to what choice would he make and how far his resolve would last to stay ‘human’ despite his ghoul side clawing at him in starvation.

Curiosity aside, the art style was not at all appealing to me at first. Maybe it’s because of my initial aversion to horror and gore, but it seemed too strong for my taste. But from the very first volume and all throughout the series – since the story is all about ghouls, their bloodthirsty and uncontrollable urges, and Kaneki’s battle through that world – it has a relatively consistent amount of gruesome scenes. So I started to adapt to it.

The drawing style was one of the major tools in delivering scenes and making them as horrific as possible (it is horror after all). It shows contorted faces and vivid strokes of black which can be seen in fight scenes and ghoul transformations. These kinds of drawings delivers perfectly the mood the author wanted the readers to feel. But feelings aside, some of the panels did fail to properly show some spectacular fight scenes making it hard to follow due to the chaotic and somewhat messy style.

The characters, on the other hand, were a slew of very interesting individuals; the human loving Yoshimura, the mask maker Uta, the Gourmet, cowardly Banjou and even Hinami who brings out the soft side of Kaneki. Even the CCG members who are hunting down ghouls demanded attention from the readers, especially Amon and Juuzo with somewhat similar backstories being raised by ghouls themselves. There were also major players introduced later on with the appearance of one-eyed ghouls, which then gave way to revelations about the events surrounding Kaneki Ken and the true reason he was made a ghoul.

The story was really engaging for the first few volumes especially during Kaneki Ken’s capture and that incident when his hair turned white. Not that I enjoyed that scene because that was horrific, to say the least, and it still gives me shivers remembering it. But that scene was a turning point for Kaneki to become stronger and more ruthless, leaving his old self behind and finding whatever he needed to do to protect those who are important to him.

“Rather than a person who hurts others, become the person getting hurt”

Also, there is the mystery of the one-eyed owl and the legendary Arima who is said to be undefeated – both of which was urging me to read and read to find out more about these two. There were some moments though over the course of the story that I would just skip over the babbles of the CCG and just jump to the scenes with the main characters. As much as the fight scenes were very engaging and brutal that you cannot keep your eyes off it, there were some scenes which I have no patience for or just doesn’t care enough to read.

And as it neared the end – with characters getting their limbs torn out, blood all over the place, revelations finally made, and Kaneki making his final stand – I was a bit relieved for it to be over. For a story that started so well in my opinion, it was not a very rewarding end. There’s the feeling that there should be something more. There were several loose ends and I was left feeling unsatisfied as to how it turned out and disappointed that the end came too soon. The characters could have developed more and there were also some characters that I thought was worth more than just a few pages; while others just disappeared adding to the mystery but also to my frustration as well. 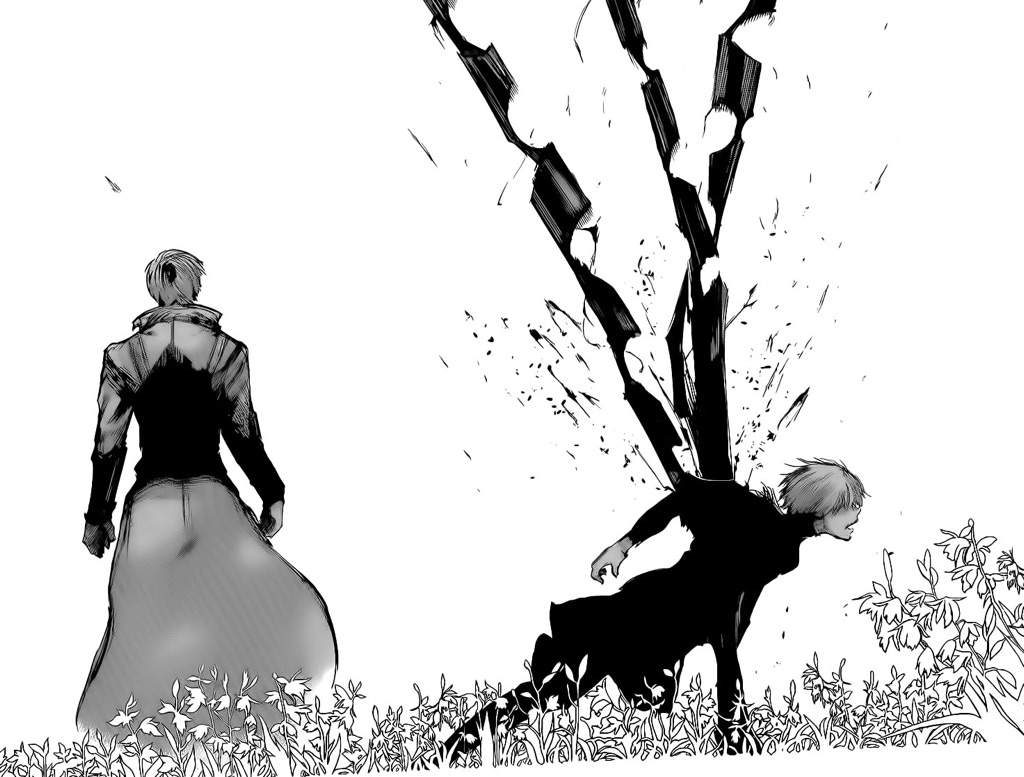 Though I admit that the revelation about the author Takatsuki Sen was one I did not see coming – and that was the only point at the end which kept me awake, reveling in the realization that in a way, it was her book that started it all. The decisive fight at the end was also one I liked, it was intense and messy but somehow beautiful when Arima appeared and proved he was undefeated once again. Arima Kishou is one intriguing character whom I am very curious about. I need his full backstory because no one is that strong over ghouls and still be labeled human.

The ending was definitely designed to drive one crazy and theorize to no end. It was made clear that this story was not yet finished. That the tragedy of one Kaneki Ken is still ongoing.

Having had a great start, I did not enjoy this as much as I thought I would. But it has an interesting world for sure. Here’s hoping that the series following this one (Tokyo Ghoul:Re) will be able to redeem what enthusiasm I had left for this manga.

But Tokyo Ghoul, for all its faults, also teaches us the most real lessons of life which revolve around pain and sorrow. That life doesn’t always give you the best options to choose from but you make do with what you’re dealt with. That nothing is ever just black and white. And that we are all shades of gray from the mix of our choices, and those choices bring about consequences that we have to live with.

7 thoughts on “Tokyo Ghoul by Sui Ishida: It All Started With A Book”