Hello aniworld! Before you ask, yes that title was a reference to a Taylor Swift song.

It seems that almost everyone is currently preoccupied with the 12 Days of Anime while here I am leisurely enjoying some episodes of Mahoutsukai no Yome and contemplating on whether I should post this today or not. I should have waited for the next episode but Silky is checking up on my progress so here it is! 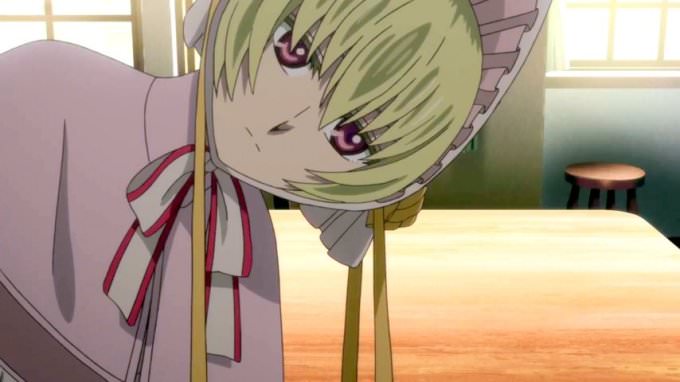 I have been following the story of Hatori Chise and I am now on the 9th and 10th episode of the anime. It just now occured to me why Chise looks a bit familiar with her short, red hair and petite frame. Shirayuki in Akagami no Shirayukihime is also a character with red hair whom I also adore. But contrary to Chise’s gloomy and depressed aura, Shirayuki is a positive character and would likely look on the bright side of things. Yona in Akatsuki no Yona also displays strength and vigor with her flaming red hair and never give up attitude.

The red-haired heroines I have met in other anime/manga seem to have grown into such powerful and self-dependent women as far as I was able to catch up on their stories. Red (as their hair) is the color of passion, love, stubbornness and chili (well I’m challenging spicy right now so pardon me). They eventually found the courage to follow what their heart desires and charged through the obstacles that faced their way. But it is also fair to say that red can be the color of loss, of despair too (bloody red). Such is in the case of Hatori Chise in Mahoutsukai no Yome who seems like she is at the lowest point in her life until she was rescued (bought) from the seemingly blackhole she has been living in by the Thorn Mage. 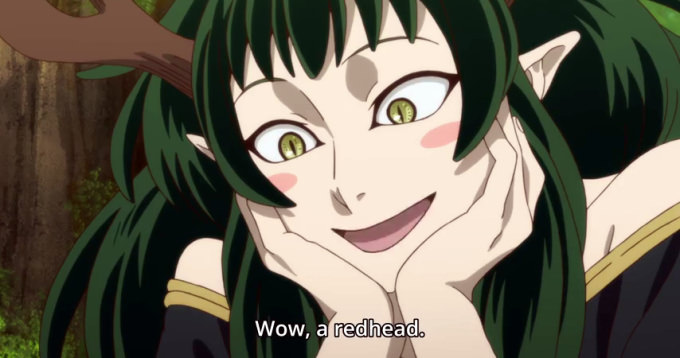 The duality of the color red (a quote saying it better than I ever will):

The defeated and depressed Chise, it will be a joy to see her grow into her strength. But for now …

The story so far was after the encounter with the immortal chibi Cartaphilus and adopting the now familiar Ruth into their family of three (now four). Silky is as stoic as ever and a mother hen through and through. Despite her seemingly distant appearance she displays her concerns towards Chise rather forcefully as seen in episode 9. Get a silky of your own who forces you to go shopping so you won’t mope around the house. The reason for moping as it turned out was due to Elias’ absence because he was locked up in his room.

The newly bonded Chise and Ruth stroll around after being kicked out of the house bumped into Angelica. The usual hello how are you and catching up, and the conversation gets a serious turn when the issue of Chise’s dependency on Elias was brought up. I was a bit shocked myself at Chise’s angry reaction at Angelica’s words. I initially thought that she was getting a good grip of her own powers and has started to stand on her own, but it seems that she is still a work in process.

The story felt like a crawl to me. I struggled to immerse myself in episode 9 because it felt like it was sluggish and not much was happening. Sure, we can see some things here and there and the surprise that is waiting inside Elias’ room. But it made no impact due to the fact that Chise herself wasn’t all that rattled. It was all good seeing her not terrified of her mage, but really? Not much of a reaction from her aside from her blind devotion to the mage. And the mage was supposedly not in control right? But it seemed fake to say that but not even a tremor nor a change in his voice. It was dark so we couldn’t see much of the hulking and slithery mage, but should his voice be the same calm, collected and flat tone that he normally uses? Where is the roar or hissing? Or anything? Give me something here. 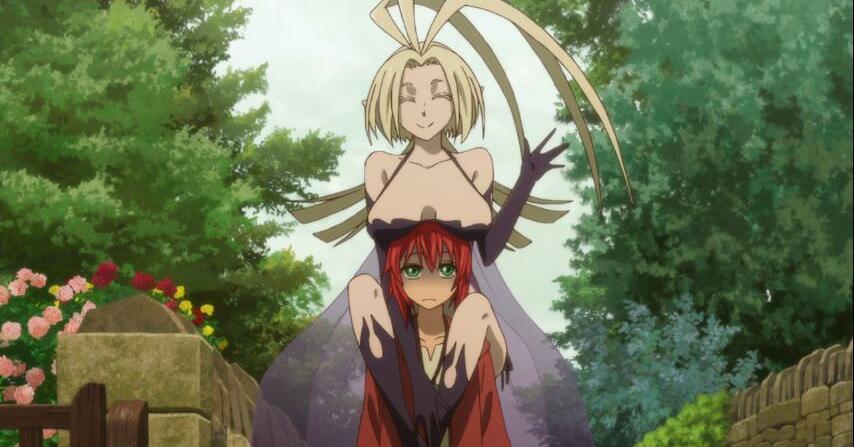 Me finally getting something: A book lover and a vampire. (Yus!)

So Elias disappeared, and the duo – Chise and Ruth – went around looking for him. Another supernatural creature in the form of a floating vampire (the ones I read about doesn’t levitate) introduced herself (or rather Ruth did) to the two. A ‘something scientific-like term or words’ exists for their kind but essentially they are creatures who grant talents to men in exchange for blood. They usually prefer younger ones but this vampire is with an old man who is apparently a book lover and also a writer. It is a short but sweet story about loving something that you cannot have or something out of your reach.

About the subject of love. It maybe a little bit too early for our dear heroine just like what Angelica said when she gave Chise the ring (not for her fourth finger yet!). Even Chise herself said so. By the end of the 9th episode they finally found the mage back to his usual self, and the appearance of another kawaii creature promises another episode to look forward to because Chise is coming back to the Land of Dragons! 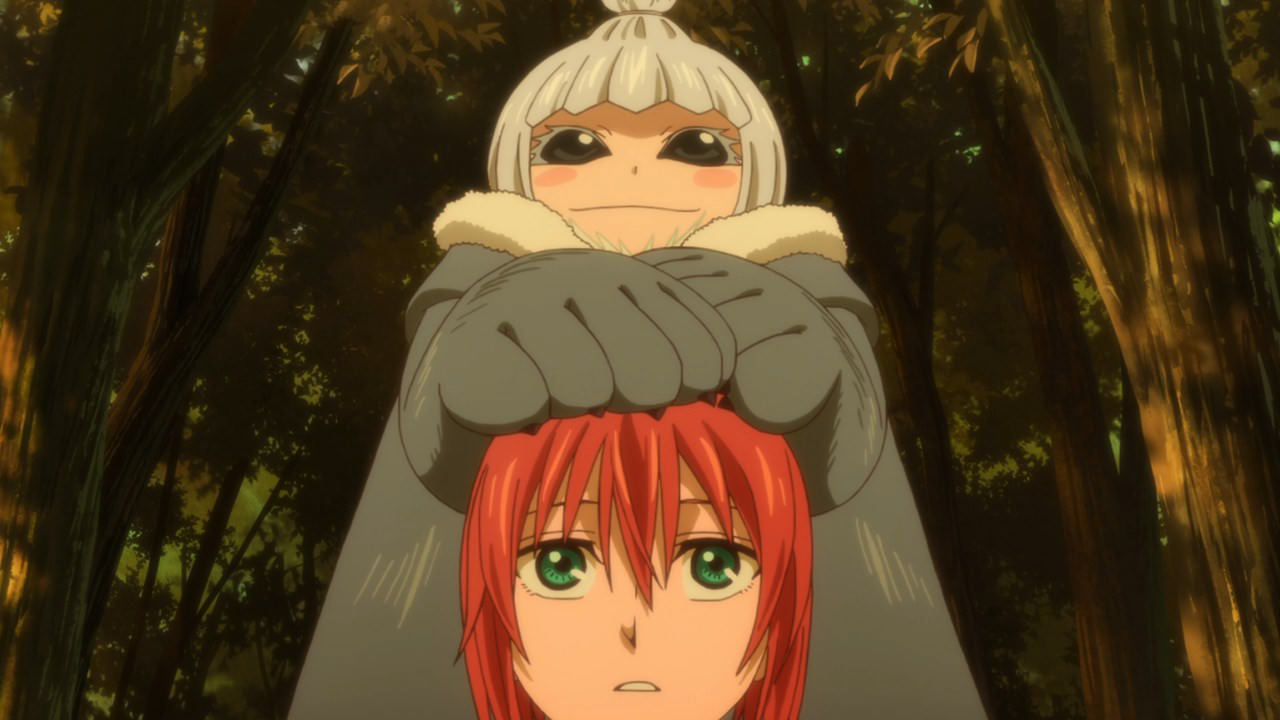 This time it’s a “Selkie”. (I remembered because it sounded like ‘Silky’ and I love her). A creature of the sea with a human and seal form – atop a dragon. Talk about diversity here.

Episode 10 saved me because they’re back at the dragon turf. But the focus this time was Lindel and also Chise finally starting on her wand. There was this funny scene where Chise fell from the former-dragon-tree and Ruth threw a fit after catching her (aww) because apparently familiars are very protective- well duh, they’re life force is connected to each other. Anyway who falls without even trying to break their fall? Chise does. And to Ruth’s over-protectiveness Selkie said: “It wouldn’t kill her to get to know the rocks a little.” It was hilarious because I wasn’t expecting that funny quip.

Same as with Angelica, Lindel also commented on how Chise is content on being Elias’ pet to tame. So it seems that it is a serious offense dear Chise, you’re already on strike two. I wonder who will bring it home..

Lindel also gave a bit of a background on mages and how he met Elias. He also remarked that long time ago the mages already know they were different from humans, but even with all their gifts and power, they also seek meaning to their existence.

The episode gives us hints of who Elias was before he became the Thorn Mage that everyone knew. A creature who is close to a fairy but with a hint of human. Lindel who found him starving in the woods and brought him to his master. Elias also said that the only thing he remembered was .. brace for it – RED. Funny that I was talking about Chise’s red hair while coincidentally another red appeared in this episode.

Chise also mentioned her being cursed that is why she is not afraid of the mage, coinciding with Lindel’s statement that they are all cursed. But a wise sensei once said: “Curses and blessings are in the same essence, Lindel. What matters is how you take it”. Or if you look at it in another way, curses gain you blessings in a way to compensate or to balance the negative. Two cursed people can become a blessing to each other when joined.

Episode 9 and 10 focuses mainly on Chise and Elias’ relationship. How the people around them are worried for the two. How Chise is slowly realizing the depth of her attachment to the mage. How fast dragons grow, how Chise’s head is always used as an armrest and also how awesome Silky is! But the episodes also gives us a peek on Elias’ backstory. How he met Lindel and became his apprentice and how he got his name ‘Elias‘ – while here I am still wondering why Chise is called ‘Robin‘… 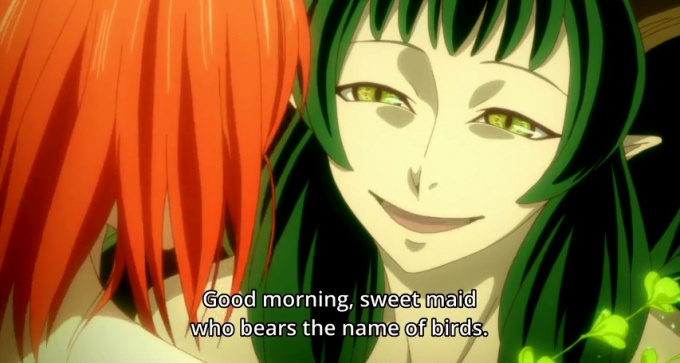 6 thoughts on “Mahoutsukai no Yome: But Loving Him Was… Red?”