“At times he lends a hand, and at times, he shows his fangs.” (Guess who)

I finally got around to watching another four episodes of the anime. Since I already offered my thoughts on the first batch of episodes, I figured I might as well do another. Not that I am being forced or becoming an unwilling participant, because I assure you I am not. Silky got her eyes on me for skipping breakfast because I am staying to watch this.

My philosophy these days: better late than later. Anyway, here are my thoughts on the said episodes and what got suck in my head — I had to post something to let it all out.

There are animes you watch without bothering for the opening, you just jump straight to the story in the episodes. But of course, some would say that it would be blasphemy to even skip a single second of an episode. Mahoutsukai no Yome belongs in my category of not skipped openings. I really like the opening song as it invokes a sense of you diving into another world, add to the fact that it doesn’t spoil too much (let’s not think too much about that phoenix) but gives you just enough of a peek. 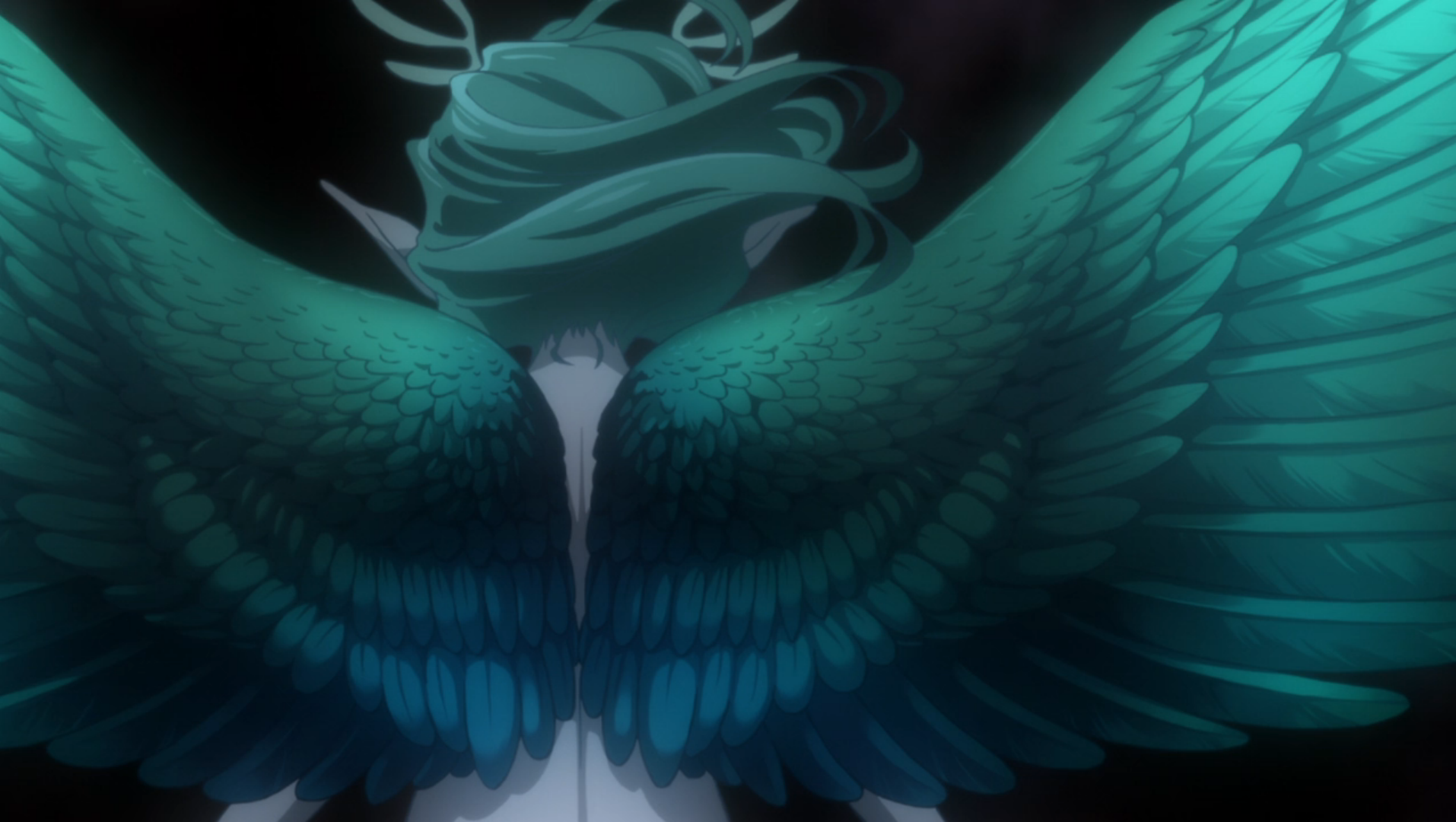 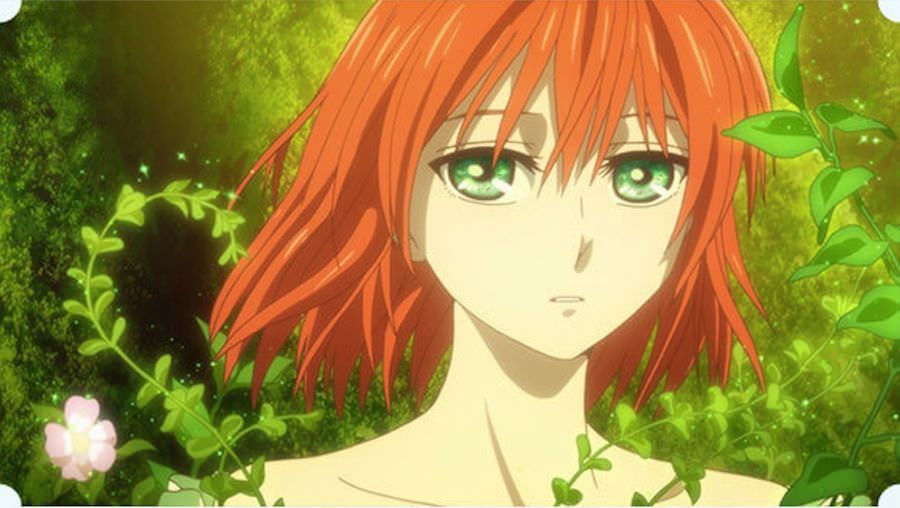 Nothing pleases one more when you watch something with an engaging world and storyline paired with eye catching animations. Mahoutsukai no Yome is a world immersed in fantasy and the animations fully drives home the point that it is definitely out of this world. There were enchanting scenes with the faeries and the freed lost souls, but it is somehow balanced by the darker and some brutal scenes that surprises me here and there. Though I say brutal, the anime didn’t fall into gore (which I am not overly fond of) since it didn’t focus much on the blood and the violence but more on how it is necessary for the storyline (those poor cats!). But as the story with the cats drew to a conclusion, we are once again treated to striking visuals with Chise as the sleeping beauty. Now, let’s talk about more pressing matters, like the ‘married life’ of Chise and Elias. The title is Mahoutsukai no Yome (The Ancient Magus’ Bride) after all.

The queen and king of the faeries…

Not only they managed to introduce another set of characters who were also alloted their fair share of grand entrance, but said characters also drew light into the pair’s supposedly married life. The only thing that bothers me a bit (aside from Elias having that monstrous skullhead – much like a fairytale retelling of the beast), was the way their relationship have been portayed so far. Chise is portrayed to be entirely dependent on the mage. She seeks Elias’ approval and fears she will disappoint him if she fails. Thankfully, this has started to be a non issue for me after I continued to watch. Because contrary to Elias’ initial reasons for his acquistion of Chise, it has been shown that he cares and is very protective of his bride. He even explained that though he understood emotions like sadness, anger and laughter, he cannot emphatize. More likely, Chise will break him out of this no emphatizing zone. Probably.

Speaking of introductions, each world or domain of the magical creatures that Elias and Chise were in were given the proper amount of time to be introduced. Kudos to the anime for that because for the audience to be fully immersed in the storyworld, that is exactly what we have to see. So far, we have seen and heard about them through Chise’s perspective – the dragons, the faeries, the cats, and more. Now, they get to meet with the king and queen of the faeries. Titania and Oberon … now where have I heard those names?

As I was watching this bit and I had time to think because there was more than enough time to ponder what with the queen’s longer than necessary screentime for the entrance (since they are royalty we’ll let it slide this once). The world building is definitely gonna be bait for us paranormal junkies and fantasy readers. The world is reminiscent of the Elder Races series with a hint of A Court of Thorns and Roses, and even Immortals After Dark. If you read fantasy books and watch anime, you know what I’m talking about. Not that the story is uninspired with the older than dirt hero and mortal love interest turned powerful badass heroine. Mahoutsukai no Yome offers you a combination of these worlds without the machismo of the males, not too much sexual tension but just a hint of underlying or even budding romance between the two. Suffice to say that whether I like it or not, we cannot get around the fact that Chise is starting to sort of maybe fall for the mage. But what the hell? I’m here for the fantasy and not for realistic assumptions.

But Chise is not your ordinary human, is she?

Sleigh Beggy. As unique sounding as those words are, the mystery behind the characteristics of the Sleigh Beggies are finally getting revealed bit by bit. It turns out that they consume the energy around them and release it as magic, essentially them being a creature fully attuned to nature. Suits perfectly with how ephemeral and short-lived they are. Nature and magic alike, with its obsession with balance (yin and yang at work), rightfully takes it due from beings who are extremely gifted. It is also further revealed that the Thorn Mage is seeking a way to prevent Chise’s early demise.

“At times he lends a hand, and at times, he shows his fangs.”

There is also the contrast between Elias and Chise highlighted in the episodes especially when the mage lost control and fully transformed into the scary creature that he is when Chise was injured. Much like a mate protecting what’s his, he goes on a rampage lost to his instincts. Chise (who apparently can survive being struck in the chest despite the dramatic stabbing) calms the mage down. But the girl also has her fair share of out of control moments when Chise, with her own arsenal of gifts  – and I say gifts because as opposed to the pessimistic view, it’s so much more fun seeing the good side of things – stands in the way of one psychopathic chibi who hates being called by his real name (Cartaphilus) to protect Ulysse – the black dog.

Taking of a familiar…

What left the most impression on this four-episode anime watch was how intimate the familiar bond is. As you get to episode 7, Chise and her mage encountered the infamous black dog and his own set of backstory and memories. You’ll probably already guess that he will be the ‘familiar’ that Chise needs because coincidentally Elias thinks she should have one.

Imagine having to share everything with someone. The ultimate promise to bind yourself with another, sharing your emotions, senses and even your time. Much like mates. You die and your familiar also dies. Now that’s a commitment! And so I wonder…Chise is whose bride again? That seems far more intimate than her relationship with Elias ever will be. Or maybe the two will just be a mage and apprentice to each other after all..

The slew of the paranormal creatures abound in this anime. Faeries, shifters, mages, dragons, cats and even will-o’-the-wisps totally got me hooked. I’m getting curious as to what they might offer next and also how the characters will develop further and their relationships. I have to say that I am quite taken by the anime especially with these episodes that I have just watched whether it be the visuals or where the story is going.

As I have been reading books mostly of paranormal romance and fantasy this year, I can almost read how it would be printed in words if this anime is a book (though it might be less sarcastic and more sophisticated than this):

An ancient being wandering the world finds a human who he deemed his (or in this case his guinea pig or pet). But he eventually develops feelings for her over the course of the story. He’s a mage from a fantasy story. A legendary being feared and avoided by most. The monster will show his fangs when what he considers his is threatened. On the other hand, the girl with nowhere to go and shunned most of her life finds shelter and family in him. The girl who accepts the mage for all that he is. Fangs and Skulls and all that.

Then comes another immortal who wrecks havoc just because he can. Beware of immortal creatures who have nothing to do. They might cause problems when uttery bored.

(That was bad, I know. Let’s not talk about it anymore.)

Lastly, if you don’t already know, I am totally an escapist. I escape to the world of fantasy and fiction to break from my mundane life. So it is mainly the reason for my reading (which is my first love) and for my watching different stories from different platforms like drama, tv series, movies, live action and anime.

But too much of it can be a bane too. Being too immersed in fiction can be quite addicting and will probably lead to unproductivity in your real life. So I’m just taking it slowly and getting my share of fiction at my own pace. So bear with me and my turtle ways.

3 thoughts on “Mahoutsukai no Yome: An Escapist’s Dream and Nightmare”