When student life drags you down, but you still want to read Shingeki no Kyojin (Attack on Titan) all over again but you don’t have time for it, you end up reading the related ones.

Those completed manga with only two volumes worth of feels and backstory (because I somehow feel that the whole SNK is a whole backstory in itself). A spin-off and a gaiden (side story) featuring Annie and Mikasa in Lost Girls; and Levi and Erwin Smith in the Birth of Levi.

Did I mention that those two in the cover below are my favorite Attack on Titan characters? NO? Well, I’m telling you that I have a soft spot for these battle-hardened badass characters. I feel a bit sad that they don’t have much interaction in the original storyline what with one of them being in the Military Police and the other in Survey Corps. Come to think of it, IF I happen to write fan fiction (never say never!), this will be one idea. A star-crossed or rather division-crossed love story (or maybe a tough love sparring session?) between Annie and Levi.

Yes, enough with the weirdness. Here we go:

BEWARE: there are SPOILERS from the original storyline. So please tread carefully. Or better yet, read the original first.

The unknown story of a certain day in Annie and Mikasa’s life.

The first half of the story focuses on Annie Leonhart and her time in the Military Police before her eventual capture as the female titan and the encased-in-ice theme thereafter. She played the soldier to avoid suspicion and even performed tasks for the MP while setting up her plan to fulfill her mission which is to capture Eren. 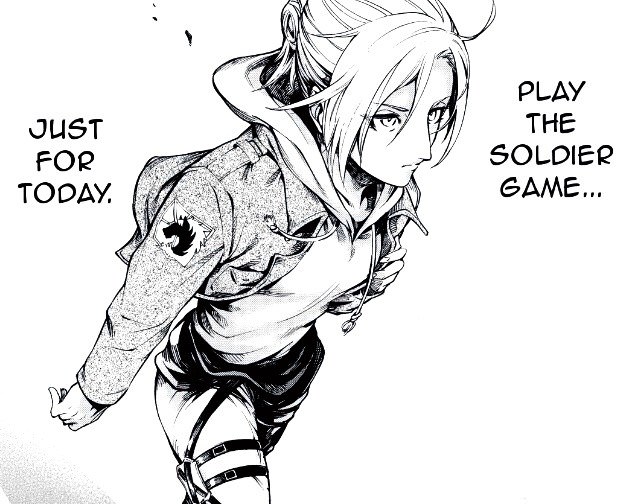 I think Annie’s charm lies on her stoic appearance which makes you want to discover what’s underneath the mask. She reveals some of her vulnerability too in this gaiden when she talked about how her father trained her mercilessly every day, and when she had a conversation with Mikasa where she also hopes that she never have to use her ‘ring’.

Annie obliterates those who dared fight her. She is very well-versed in hand to hand combat which makes her a formidable opponent as demonstrated when she was on her MP errand against some thugs.

She is also a good judge of character and street smart.

She displays hints of compassion when she actually listened to Carly Stratmann’s story and allowed her to leave the city.

A fun fact: She became a fan of donuts after that one mission. “That crispy and crunchy snack topped with a special powder. Donuts. I will eat that one more time.”

On to Mikasa’s side story. It was a memory of her first meeting with Eren and their recurring friendship. How the famous scarf was given to her and who she was before the tough and unbeatable Mikasa Ackerman. It turned out that it was a flashback of sorts during the time where she thought Eren was dead and she was contemplating death by titan too.

I found out that she was an adorable child: 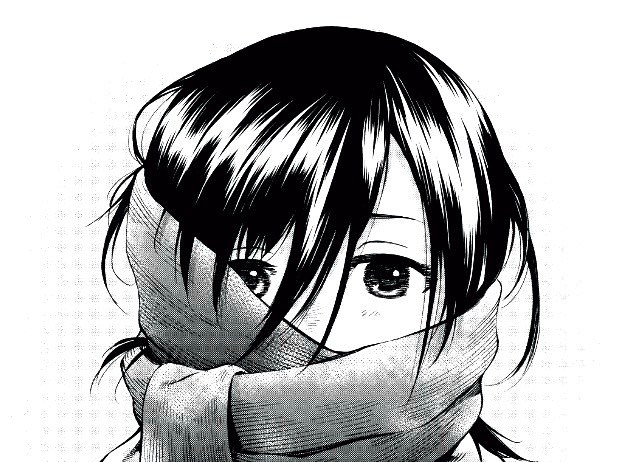 And that her concern for Eren that borders on obsession was very much evident in their childhood memories. It makes me want to strangle Eren for some reason. Her constant need to be with Eren was the theme of the gaiden (sigh). She was even tested by this magician-slash-performer in a mask (I’m very curious to know who this guy is) when he goaded her until she stabbed him. Duh.

Her story didn’t catch me the way Annie’s did. Probably because of my biased colored lenses and my dislike for Eren.  And even though she appears as the unbeatable soldier with unparalleled skills in Titan maiming (except for Levi), she is a vulnerable girl especially when it comes to those she considers her family. Maybe it’s a way to balance her too strong and too skilled character but it could also be her fatal flaw.

A spin-off manga that centers around Levi’s and Erwin’s past.

The young Erwin Smith is a rising star in the Survey Corps, humanity’s only hope of defeating the man-eating monsters known as Titans. Ruthless and dispassionate, Erwin’s mind is devoted to strategies and intrigue. But beneath Erwin’s feet is another world, the “Underground,” where humans are born and die surrounded by the garbage the Capital throws away. Here, the criminal Levi survives on his wits and agility. But when these two ambitious men cross paths, who will prove himself stronger?

This spin-off mainly focuses on Levi Ackerman, and it serves as a prequel to the main story by Hajime Isayama. 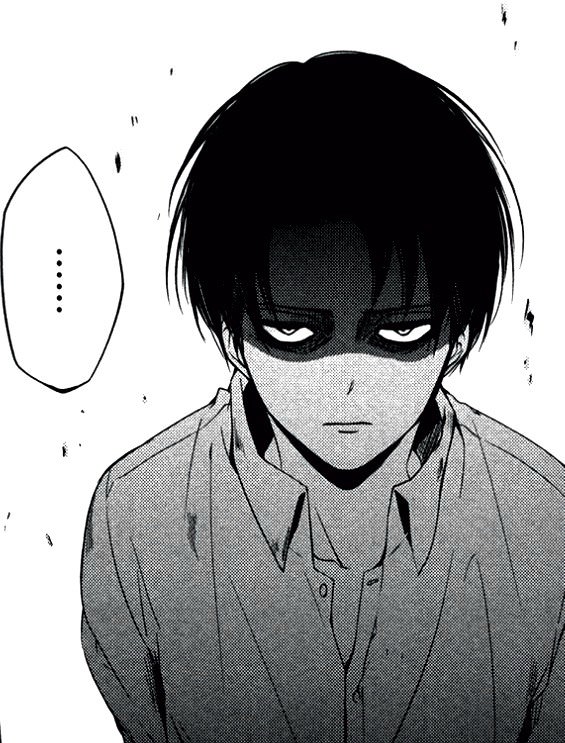 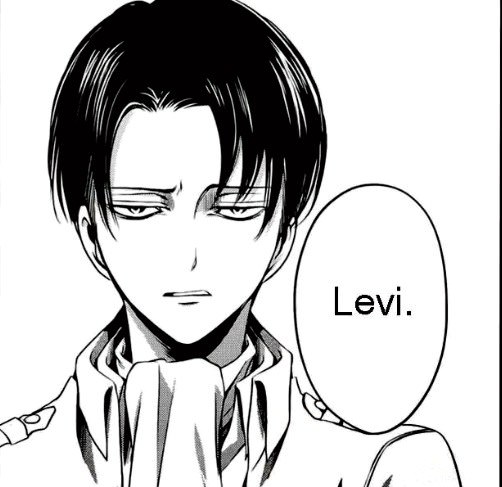 Well, this was surprisingly emotional. Though from Levi’s image it would seem impossible for him to truly connect with someone, much less two of them. Levi is someone who lived in the underground before his service in the Survey Corps. He’s the same clean freak, morose and stubborn Levi that we know. But this time he’s with two others — Isabel and Farlan. It would seem that the trio was as close as a family could be. They have been trying to escape the underground and live outside, which is pretty similar to the bird in a cage situation with the wall and the titans. And they were willing to do anything for that freedom. They meet Erwin Smith who pretty much coerced them into joining the squad. The three eventually ventures outside and faced the horror of the titans. 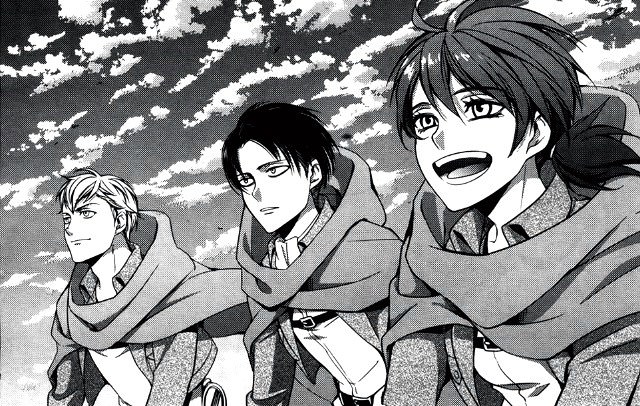 But where there are titans, there are deaths. And even with humanity’s strongest soldier on your team — he cannot protect all. Levi once said to Eren that when making a decision:

“Whether you trust in your own strength… or the choices made by reliable comrades. No one knows what the outcome will be. So, as much as you can… choose whatever you’ll regret the least.”

He made a decision which resulted in the death of his comrades. Though he is not to be blamed directly, it would seem that Levi somehow blamed himself. He said it was because of his pride, arrogance [and his choice to shoulder the burden alone].

Erwin who somehow indirectly led his comrades to death by his plotting and scheming makes it clear to him that all of it was done for the sake of humanity (his usual repertoire). He urges Levi to use his strength for the Survey Corps and help defeat the titans. So we know how that turned out…

The spin-off somehow manages to give Levi a backstory that not only sheds light on how he came to the squad but also to show another side behind the strongest soldier. He is affectionate with Isabel who idolizes him and trust Farlan with his plans (even if said plan failed in the end). He will kill for those he considers his own and can tolerate the pain and humiliation for himself but never when it comes to the two as shown at the beginning where Erwin questions him.

In total there were 8 chapters of the spin-off and the remaining chapter 9 were specials including — how Farlan first met Levi, the singing foodie that is Isabel, and their initiation in the Survey Corps.

This has been somewhat of a filler read for me because I miss the characters featured in these stories. Thank you for reading!