Here’s to my first buddy read. Yay! This should be another addition to my post of firsts. Another bookworm achievement unlocked thanks to story_girl.

He wasn’t supposed to choose her…

Seafaring prince Dilys Merimydion has been invited to court the three magical princesses of Summerlea. To eradicate the pirates threatening Calberna and to secure the power of the Sea Throne, Dilys vows to return home with a fierce warrior-queen as his bride. But politics has nothing to do with unexpected temptation. 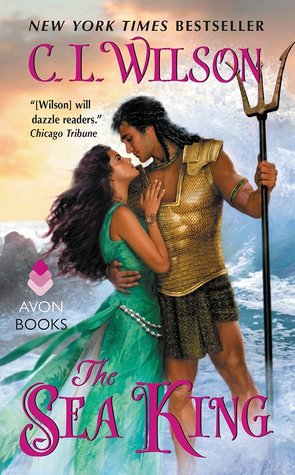 She didn’t dare wed him…

A weathermage like her sisters, Gabriella Coruscate’s gentleness exemplifies the qualities of her season name, Summer. Yet her quiet poise conceals dangerous powers she cannot begin to wield. Better to live without excitement, she reasons, than risk her heart and lose control— until an irresistible Sealord jolts her awake with a thunderclap of raw desire.

Until evil threatens everything they hold dear…

When pirates kidnap Summer and her sisters, Dilys is in a desperate quest to save the woman he loves. Only by combining his command of the seas with the unleashed fury of Summer’s formidable gifts can they defeat their brutal enemies and claim the most priceless victory of all: true love.

I didn’t know what to expect with this book. I got into this virtually blind – as is my M.O. these days.. I think I just want to be surprised (in a good way) let’s leave it at that.

This was my first book by C.L. Wilson, and considering that this is the second book in her Weathermages of Mystral Series, I was hesitant to read this at first, but it turns out that this book can be read as a standalone.

It started off as a pretty slow read for me since I am getting into another world. Gotta know the ins and outs before you dive in head first, right?

The Calbernans are a very interesting group of people; their kingdom, politics, traditions, and customs aside from being thoroughly explored in the book – is ruled by a woman! Pretty much the first few chapters dealt with world building and I loved it. It was a great introduction to another world. I also love how the author focused on the women and their much more proactive role in the kingdom. Yes to strong independent women!

The relationships in the story have depths and a delight to read, especially the sisterly bond of the three princess – erm.. the three seasons: Spring, Summer, and Autumn which by the way are NOT their real names but a title of sorts pertaining to their gifts. There is also another sister, Storm, who was the female lead of the first book in the series. Her scenes with her Winter King made me curious about the first book, so naturally, I added it on my to be read pile.

“There were creatures in the world to whom a man dare show no fear if he hoped to survive an encounter with them. Women—particularly angry women who thought they were protecting a beloved sister—were among the most dangerous of such creatures.”

By the way, the female lead, Summer’s real name is: “Gabriella Aretta Rosadora Liliana Elaine Coruscate” (copied and pasted that cause who can remember a name that long??!)

And our Pira- I mean Sealord’s official title? Sealord Dilys Merimydion, son of the Myerial Alysaldria I, Lord Protector of Calberna, Keeper of the Golden Isle of Cali Kai Meri, Admiral of the First Fleet, Commander of the Seadragons, the most celebrated battlegroup of the Calbernan Navy, and Captain of the Kracken, flagship of the Seadragon. (Daenerys would feel threatened!)

For all the courtship and sexual tension between the main characters, Dilys and Gabriella, what impressed me the most was how detailed and very much engaging their mating rituals and rules of courtship were. With the Calbernans’ ‘ulumi’, ‘liakapua’ and the magic gifts that they possess and of course our female lead’s very own Siren song. It was really quite fitting that Gabriella’s real gift is the siren’s song since the Calbernans are a race of pir – I mean sea lords and seamen. And considering Dilys’ ability to breathe underwater, command waves, talk to fish and sea creatures alike – he is Poseidon in the flesh! So yeah, a good match.

“Calbernans didn’t fear a woman’s strength. They celebrated it. Admired it. Wed it, if they were lucky enough.”
Story_girl: Let’s just say I’ve never admired a race more!

“Calbernans thrived on feminine attention. It was the sweetest food for the soul.”
Chizurue (Me): No wonder they ran around shirtless 😉

Then the looooong nigh- I mean courtship has begun. I mean long because it felt that way to me. It was getting frustrating as it feels that the story is dragging in that aspect. The chapters focused mostly in the courtship – Gabriella’s repeated declarations of refusal and Dilys’ unrelenting pursuit. Given that this is romance I could understand it at first, but not when I started forgetting the antagonist in the story.

The character development was a long time coming, and I was hoping for one especially for our female lead. Gabriella has a tendency to underestimate herself too much which eventually leads to self-loathing and that is the main issue here. She blames herself for everything and thinks of herself as the worst (Listen to Dilys sometimes will you, stubborn Summer). Dilys, who believes in her more than anyone eventually gets her to see outside of herself. Though the prince has his moments of insecurities too if I must say.

But as if my patience was getting rewarded, the story finally gets a move on though it veered into something unexpected, to say the least. The capture of the princess was as expected (refer to synopsis), the identity of the villains were pretty obvious, so no surprises on that front. But as the story progresses and the villain resurfaces in the story with his captive, my reading buddy puts it:

Story_girl: I was not expecting the book to be this dark

You and me both!

But this is romance and true love wins. The blurb from Goodreads pretty much shouted it out. The characters do get together (obviously) it was only a matter of when and how. And when they finally did … it was not heart fluttering nor exultant joy on our part – but relief. We were sort of relieved that it finally happened so we can just get a move on from that.

“I’m the forest fire, and you’re standing there with a glass of water saying you can put me out. But you can’t!”
He arched his brows. “Considering that I’ve spent the better part of last fourteen hours proving that I can, in fact, light your fire and put it out over and over again, I’m vaguely insulted by that remark.”

To wrap it up…

For a read this long and by an author that I have never read before, it is safe to say that I got hooked because the world building was awesome and very detailed. I liked how the characters were presented and their accompanying gifts, talents and personalities, even their customs and traditions was interesting enough. It was inspired, of course, by different myths but it doesn’t take away the originality in how the author brought the world to life. My only regret was how the story progressed. It was dragging. It could have been shorter and still be amazing. And did I mention that the cover could be improved? So that’s it for this buddy read review. Thanks for reading!

Here’s story_girl’s review if you’d like to check it out!

One thought on “The Sea King by C.L. Wilson: A Buddy Read Review”